Selected in the top 100 Economics Sites 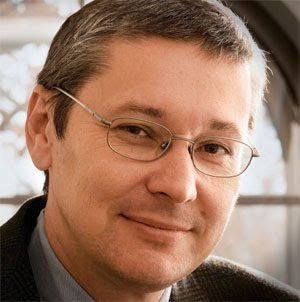 I suppose Mankiw's posts should now carry a disclaimer: "this message is jointly approved by both Mitt Romny For Pesident and Bain Capital".

Well....he is an adviser for Romney.

Exactly. The problem is that nonpartisanship WAS what separated Mankiw's blog from Krugman's. Also, he's so quick to point out normative vs positive economics in his textbook and his blog. I suppose politics gets to the best of them.

That's strange. I read Mankiw's introductory microeconomics textbook ("Principles of Microeconomics," 4th ed.), but I don't recall any obvious political leanings in his writing. Actually, I remember expecting to find some, but was surprised by how neutral it all seemed.

Though, he does mention how it pays to be beautiful. Utilizing Brad Pitt's handsomeness and relatively large income, Mankiw provides an instance that lends credence to the study that shows "people who are deemed more attractive than average earn 5 percent more than people of average looks." (p.418)

By this point, I am baffled as to why I wasted five minutes responding to a comment made by "Anonymous."

Ashton, you are supporting exactly what I am saying. I didn't say that his textbook has any political leanings - it doesn't. The only thing that I said regarding his textbook was it points out normative vs positive economics (I suppose you skipped that chapter - p.28 - 4th ed.) and he often makes sure to point out the same in his blog ........ yet this recent post reeks of partisanship.

Be sure to read the comments that you are replying to. But, by this point I am baffled as to why I wasted 2 minutes responding to a comment made by someone named "Ashton".

"But, by this point I am baffled as to why I wasted 2 minutes responding to a comment made by someone named 'Ashton'."

My comment wasn't mocking you personally, Anonymous. I was having an literary gesticulation: I should have been reading for my GRE, instead of commenting on a comment made by Anonymous on a blog. Alas, here I go again. I suppose I believed you were a student from ECU (how irrational of me: how do I know?), so I feel like, as a fellow ECU student, I must confront you on something I feel is wrong.

For some reason, I mistook "Mankiw posts" for works he has written throughout his career. And Mankiw just seems to me the least "normative" economist I've ever read. So, I was trying to defend his honor.

But, I see you were probably talking solely of the blog post that Professor Parker linked to ("this recent post reeks of partisanship"). Again, I don't see where you're getting the partisanship from that post.

No more wasting my time here!

Cut the cock fight and get to work on something productive eh? Like defeating the president this November.

Ashton, in regards to your assumptions of my comments & as someone who has already taken the GRE, I would recommend that you brush up on your reading comprehension - it might help.

In regards to Mankiw, his need to opine about Bush not spending "as much time blaming his predecessor" is unnecessary and irrelevant to the general point of his post. It sounds much more like a Krugman-esque jab. Not to mention that he has been a Romney advisor for years and posts this during the campaign.

Dr Parker, what do you have in mind as "productive"? Something like this or how about this or this or maybe this?

Randall Parker
I am a Professor of Economics at East Carolina University in Greenville, NC. My research focuses on macroeconomics and economic history in general and the economics of the Great Depression in particular. I have authored two books, Reflections on the Great Depression and The Economics of the Great Depression: A Twenty-First Century Look Back at the Economics of the Interwar Era and edited The Seminal Works of the Great Depression. I am currently working on my fourth book Interwar Historical Antecedents of Modern Inflation Targeting and I am the co-editor (with Robert Whaples) of The Handbook of Major Events in Economic History and The Handbook of Modern Economic History. I have also traveled the country giving speeches on the state of the macroeconomy and other economic issues to many trade and business associations. When I am not thinking about the economy I am either chasing ducks, handicapping horses or arranging a fine dining experience. Lastly, the opinions expressed on this blog are mine alone and do not reflect upon East Carolina University in any way or manner, in whole or in part, now and forever more under the canopy of heaven.