Selected in the top 100 Economics Sites

Your tax dollars at work. 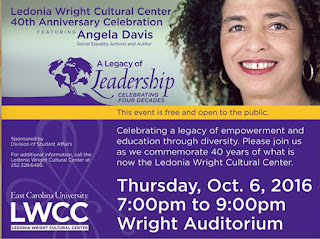 All you young folks owe it to yourselves to research the sordid history of this person (read it here). And to think the plumber in Ramseur and the truck driver in Rocky Mount and the hog farm worker in Duplin county are busting their humps to pay taxes to transfer the money to this vile wretch. You should not wonder why the public continues in their disillusionment of the university community.
Posted by Randall Parker at 9:51 AM

But, John Lennon wrote a song lamenting her imprisonment!

Before or after he kicked smack?

Do your politics leave no room for Modern Monetary Theory?

Jim: I'm sure you are a very nice man. But I know nothing of this so-called modern monetary theory which says much about my shortcomings. But you said some disparaging things about Milton Friedman and Hayek, two of the greatest minds to ever walk the
earth. You expect me to respond? Be well and all the best.

Nothing disparaging intended although I do not view Friedman and Hayek as the last word on macroeconomics. I am a little surprised that you are not familiar with MMT. MMT is espoused by economists Randall Wray, Bill Mitchell, Stephanie Kelton, Michael Hudson, Mike Norman and businessmen Warren Mosler and Frank Newman and many, many others. It simply recognizes in our fiat monetary system that federal spending creates US dollars and federal taxing destroys US dollars, that taxes do not fund federal spending, that the deficit is actually a private sector surplus and that the federal debt is simply the sum of unexpired Treasury securities and therefore a non-government asset in the form of a very safe savings mechanism. It sees constraints on the Treasury such as the General Account and the debt ceiling as purely artificial and relics of the gold-standard days. MMT suggests that austerity for a monetarily sovereign nation like the US is a recipe for certain recession and depression. You might view it as a form of post-Keynesianism but it does not fall in line with Keynes on tax issues. It largely follows the thinking of Hyman Minsky. Wray's "Modern Money Theory" and Edward Delzio's "The National Deb(i)t" are two excellent references. I think ECU should certainly expose its Econ students to MMT or at least to its predecessor, chartalism, when it comes to Money and Banking. Thanks for your reply.

Randall Parker
I am a Professor of Economics at East Carolina University in Greenville, NC. My research focuses on macroeconomics and economic history in general and the economics of the Great Depression in particular. I have authored two books, Reflections on the Great Depression and The Economics of the Great Depression: A Twenty-First Century Look Back at the Economics of the Interwar Era and edited The Seminal Works of the Great Depression. I am currently working on my fourth book Interwar Historical Antecedents of Modern Inflation Targeting and I am the co-editor (with Robert Whaples) of The Handbook of Major Events in Economic History and The Handbook of Modern Economic History. I have also traveled the country giving speeches on the state of the macroeconomy and other economic issues to many trade and business associations. When I am not thinking about the economy I am either chasing ducks, handicapping horses or arranging a fine dining experience. Lastly, the opinions expressed on this blog are mine alone and do not reflect upon East Carolina University in any way or manner, in whole or in part, now and forever more under the canopy of heaven.